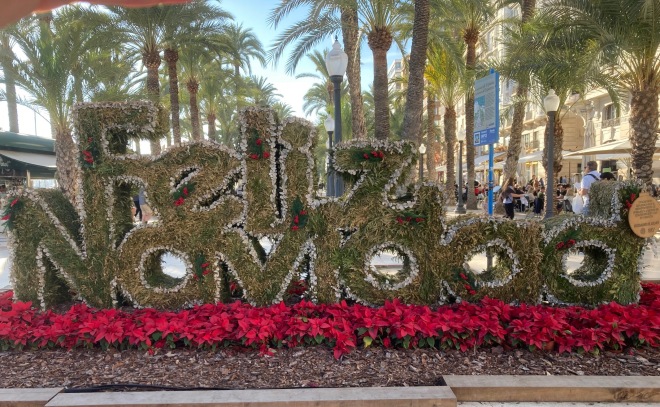 This holiday season, normally a time for seeing family and friends, we find ourselves in a stranger’s home, in a town we’ve never visited before, with a dog we don’t know. But we’re happy to be here. We are exploring a new place and learning about a different culture. You may wonder: Why did we do this? And I guess the answer is, “Why not?”

When we set out on our Ten Year Plan, we didn’t give much thought to the December holidays. As a family of six, who for a number of years maintained six different schools of thought regarding religion, we didn’t emphasize any particular holiday. We did adopt the idea of “Festivus, the holiday for the rest of us” created satirically on the TV show Seinfeld, which we celebrated sometime in December with a family meal and some gift-giving. Last year (Year 1) we found ourselves in Ecuador, where we discovered their traditions of extravagant costume parades on Christmas Eve and burning manigotes on New Year’s Eve (see our posts Feliz Navidad from Cuenca and New Year’s Eve, Loja for more).

This year, we realized we would be betwixt and between, having to vacate our temporary rental in Cunit on the Costa Dorada but not yet able to move into our long-term rental in Segur de Calafell a bit further south of Barcelona. (Fun fact: the term “betwixt and between” comes from the title of a book by Albert Camus that contains, among others, an essay on his time in Spain’s Balearic islands. Coincidence? Um, yes.)

We gave some thought to where and how we might want to spend the holidays, knowing that it could be a mistake to leave Spain’s borders as we are still “en processo” with our visas (can you believe it?!). As to the Where: The Balearic islands of Mallorca, Menorca, and Ibiza intrigue us, somewhere warm like the Canary Islands or the southern coast of mainland Spain are tempting, and we even thought about skiing in the Pyrenees mountains. But for the How: We decided to take a leap into the unknown and sign up for an online house-and pet-sitting service. This would allow us to stay rent-free and explore somewhere new.

I have never used an online dating app but I imagine this is very similar. We had heard good things about Trustedhousesitters.com so we chose that platform. First step: We had to create a profile of who we are—essentially making ourselves look as attractive and responsible  as possible to others on the site who are seeking someone to live in their home and take care of their pets and plants while they are away. To limit the matches, we were able to add parameters for what we wanted. And then we waited.

We didn’t have to wait for long. Almost as soon as we went live with our profile we started to see potential matches. It seems that holiday travel is almost as popular as dog ownership here and many people were looking for sitters. We got excited when we saw a listing for Willow and Sydney, two labradors who live in a finca (farm house) on the island of Mallorca. We indicated our interest but clearly lots of other trusted housesitters found Willow and Sydney desirable and we were not chosen. Their owners later told us “It’s not you,”  it’s the competition. Sigh. But in fact, these particular people told us they usually receive the full limit of candidates they are allowed on the platform within minutes of posting, so I guess we were lucky to be considered.

As with online dating, you have to scroll through lots of prospective matches to find one that seems like a good fit. We looked at listings in places that turned out to be so remote that without a car it would be nearly impossible to get to and from it. We found one that looked great but then realized we would be outnumbered by four-footed residents eight to two (no thanks!). Some people insist that the animals have access to all the furniture, including the bed, which is a non-starter for me. One listing for two dogs said that the dogs can’t be left alone in the house at all, so you either have to stay in the house or take them with you no matter what. But finally we saw a match that met our criteria and was located on the southern coast, a place we had wanted to explore. Fortunately, the home owner seemed to like what she saw in us. Next step: Set up a time to video chat and sniff one another’s butts (so to speak) to see if we were compatible. We were.

Fast forward a couple weeks and we have moved ourselves and our luggage from the Barcelona coast about 5 hours south by train to the Alicante coast. We are living in a comfortable home in a suburban neighborhood a short tram ride from the center of the city, and a 15-minute walk from the beach. We are taking care of a sweet, 90-pound rescue dog named Thelma. She is a low-maintenance dog, which gives us plenty of time to explore the area.

Christmas markets have sprung up in each Spanish city and town we have visited this month and the sheer number, variety, and size of the creches boggles my mind. At the port of Alicante, we came upon the tallest creche figures I have ever seen. They were taller than the mature palm trees surrounding them and the baby Jesus was the size of an overstuffed couch.

In a Christmas market in Barcelona’s cathedral plaza there were more than 50 stalls exclusively selling creche items. Despite the prevalence of sacred statuettes (shepherds, the wise men, the holy family, etc.), the most crowded and popular stalls featured pooping figurines. I am not making this up: known as Caganer (or “Pooper” in Catalan), this traditional figure dates back to the 1700s and every Catalonian creche has one. Kids even play find-the-pooper when he is well hidden in the nativity scene. Its origins are unclear, but it started as a pooping peasant in his traditional red cap, and nowadays your creche can have a pooping Santa, Elvis, Queen Elizabeth, the Pope, soccer star Messi (of course), or any one of a hundred different pop-culture (or should I say poop-culture?) figures.

On Christmas Day in this unknown-to-us place, we wandered and explored the city of Alicante. We saw families enjoying a day at the beach in blissfully warm weather and snapping photos with the giant nativity scene (fortunately, without a giant Caganer). We treated ourselves to hand-made gelato and a walk along a pier lined with million-dollar yachts and a view of a magnificent clifftop castle. Sadly, a kitchen fire in a harborside restaurant billowed smoke into the blue sky in front of the giant creche, and the firefighters were called upon to do their first-responder work in a potent reminder that tragedies observe no holidays. Chastened, we rode a small above-ground train up the coast, back to our little suburban enclave and Thelma, patiently awaiting our return.

In the evening we feasted on Spanish charcuterie, raised a glass of Spanish red ale, and toasted our dear family and friends. We plan to participate in the eating-of-the-12-grapes tradition at the stroke of midnight on New Year’s Eve and will look for any Spanish equivalent of manigotes burning that night. So while American Christmas music is ever-present, Santa stands at the entrance to department stores, and blinking strands of lights festoon lamp poles and palm trees, it’s the things that leave no doubt we are in Spain that make the holiday unique for us.

Wherever you find yourself as 2022 wraps up, we wish you a safe, healthy and very joyful holiday season. Thanks for joining us on our journey.