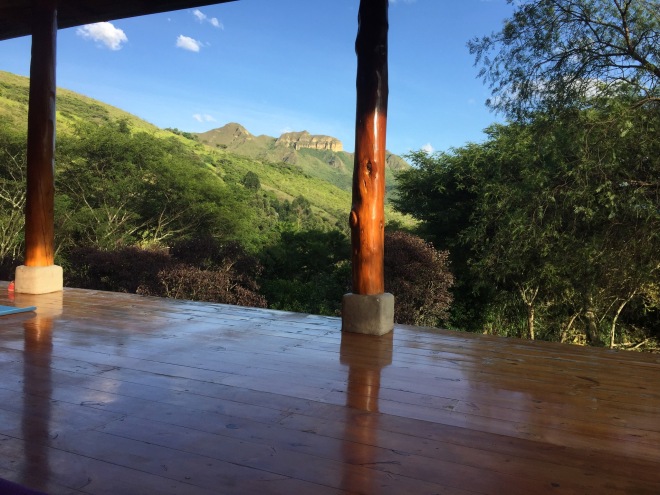 In Vilcabamba, we started every day with yoga, facing a rock ridge called Mandango as the sun rose over the Andes to the east and illuminated it. In the yoga “shala” at Hosteria Izhcayluma (pictured above), a mixed-age group of travelers stretched, downward-dogged, and breathed deeply in the mountain air. Over the instructor’s calming voice, we heard a steady soundtrack of the valley around us: birds singing, cooing, and squawking, roosters cocorocóing, donkeys honking, cows mooing, dogs yapping and howling. A hummingbird that has built its nest in the shala’s rafters sometimes buzzed through the open-air salon. We began in a slight chill and warmed during the class as the sun rose and our bodies’ energy began to hum. Then we rested flat on our backs, focusing on our breathing, connecting inward to outward, and finally sat up to thank our instructor and all that made it possible for us to be here, now.

Our week in Vilcabamba was instantly relaxing. It’s a slow-moving small town in the mountains. There’s one major road that carries all of the heavy traffic from north and south, but in town people and dogs walk in the stone streets with only an occasional incursion by a car or motorbike. It’s steeply hilly—we went on more challenging and thrilling hikes like those in Podocarpus—and our 40-minute walk to town from Izhcayluma followed a dirt road past small farms and dirt-yard homes with tin and red-clay roofs. Everyone smiles and says “hola, buen’ día’,” most houses have dogs and chickens and cows and donkeys, and in the evening and early morning you can hear all of the animals in a cacaphonic serenade. One nearby donkey in particular seemed to have a lot to say, braying across the valley all through the night.

The valley is classic, spectacular Andes—so many shades of green, luminescent when the sun shines on the spiked peaks, sharp ridges, and narrow valleys. There is a huge assortment of flowering plants, fruits, and vegetables; birds in bright orange, yellow, and blue;  and fluttering butterflies in a multitude of psychedelic designs. The town consists of about six or eight square blocks, and most of the activity is around a central plaza with a large fountain, a church with a blue-green facade, and rows of palm trees. Taxis line up there—in Vilcabamba all taxis are four-wheel-drive pickup trucks, white with green stripes, making them look like forest rangers. When you see the rutted roads they have to travel on, you understand why they are not little yellow sedans! Small shops and restaurants ring the plaza under the shade of the tile-roofed sidewalks and a handful of people sit at tables outside or on the benches in the plaza. It seems to be about an even split between South Americans and gringos, and many of both sets are dressed in Haight-Ashbury hippy. A few scruffy but enthusiastic musicians wander the square seeking tips.

Izhcayluma, where we stayed, is billed as a “refuge for weary travelers.” It is owned by German brothers, and when we were there we mostly heard German and English (in a range of accents), though most guests at least attempt Spanish with the locals. We met more people in a week there than we had in the previous seven weeks living on our own. We heard people’s stories—why they are traveling, why they came here, where they are going—and shared meals, hikes, and of course yoga with people as they came and went. Some were there for extended stays, others just a few days, each with a unique story to tell about how they came to be in this out-of-the-way place. There is something profoundly connecting about sharing these experiences with other travelers.

Of the places we’ve been so far, Vilcabamba felt most like the kind of place I envisioned settling into for a year—a slower pace, a beautiful location where there’s enough to do to keep us interested, yet small enough that we could become part of a community. One Canadian gentleman we met at the hostal had done just that—he came for a visit after retiring and then joined the hostal staff as a guest greeter, tech supporter, and all-around helper in exchange for lodging. Yet Vilcabamba is also a place apart: It’s known across Ecuador as a hippy town filled with off-the-wall, tin-hat-wearing gringos, though we did not encounter anyone matching that description. I did not envision moving to a place where we’d be just another couple of gringos among many; where the culture so caters to gringo tastes that you rarely need to speak Spanish, so this probably is not the place we’ll settle into. Still, there’s a reason all these folks live here, and there’s a certain comfort in being able to find healthful food, organic vegetables, and craft beer.

We are also excited to move on and explore more of this fascinating country. We realize now that this year is not going to fit our original plan of settling into a place to become a part of it for a year. Instead, we are essentially spending six months exploring the country. In part that’s because of our Covid-related delay in starting this year, and in part because we would not feel like we have seen enough of Ecuador to know where we might want to settle in.

This has prompted an interesting shift in our thinking—are we really just tourists on an extended timeline or are we hoping to settle into one place? Do we want to become a part of a community or do we want to see all a country has to offer, with the benefit of having the time to get to know a place a little before moving on? Right now, the latter feels like the right thing to do. Perhaps in the next country, we’ll try to explore for, say, two months (a week each in eight places?) before picking one and settling in for eight more months. Visas will be a factor as well—here we can easily stay for six months, then it gets harder to extend. But it’s also a fundamental question about what kind of travelers we want to be.

This year, it would seem a loss to come to Ecuador and not see the coast, the Galapagos, “Avenue of the Volcanos” near Quito, and maybe a bit of the Amazon region, along with the places we’ve already been. We’re staying long enough to unpack and relax in each new place—we’ve found that at least a week is needed for that. Staying a month really gives us time to establish a rhythm, take Spanish lessons if we want, explore at our own pace. And then we get to move on, explore something completely different, meet new people and have different kinds of experiences. After two months in the mountains and cities, we’re now at the shore, riding surf rather than hiking. Later, we’ll be snorkeling with penguins (we hope). Then we’ll see volcanoes.

On Friday we arrived in Manglaralto, a small village on a beautiful beach with a handful of small, sandy-feet shops and bars, dogs asleep in the middle of the dirt roads that comprise the town grid, and cement buildings that seem to be perpetually under construction. That first night, we were greeted at a beachside bar by genuinely warm smiles and welcomed as if we were old friends of the Ecuadoran owner/managers. We watched the waves roll in while eating freshly prepared ceviché and smelling the ocean breezes. The next morning, we flip-flopped to the beach, laid out towels, and began a new routine of yoga and exercises on the beach, while pelicans and frigate birds soared over the water looking for breakfast, little crabs scuttled into their sandy holes, and curious dogs came by to sniff. We have carried the idea of morning yoga from the mountains to the shore and adapted it for where we are—I now cap it with a morning swim in the ocean waves.

We do not take any of this for granted—that we have the freedom and capacity to seize the possibilities laid out before us; that we have the opportunity to see and experience these different landscapes and climates; that we have the privilege of meeting so many interesting people and hearing their personal stories. Every day, every moment, we try to be mindful of being here, now. Or maybe that’s just the yoga talking.